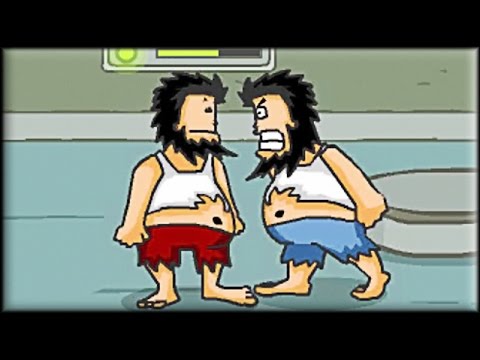 Now that the Hobo defeated the angry army dudes, he should be sleeping peacefully now. But I think it should wait a little longer because of these aliens here in Hobo 5: Space Brawl. Move the hobo inside the spaceship and beat all the aliens inside. Aside from aliens, you will also battle your clone that can use all of your techniques and moves. These aliens will also use laser guns at you, but you can pick those guns and use it against them. You will be able to retrieve all your moves again as you progress on the area.

After the events of the previous game, Hobo has chosen to sleep as always. Apparently some aliens have taken an interest on him and have abducted him from Earth. Hobo is still asleep on their spaceship but is woken up when the aliens drain his combos. Well you need to have a game of course so you have to work hard to get those combos. The aliens have made clones of Hobo that you get to fight and these clones can do Hobo’s combos. Help Hobo get rid of these fakes and the aliens as well as you trek through their spaceship.

The game’s visuals are the same as the past for games. The art style is similar where it uses cartoonish display and graphics. The art as we stated is the same as the old games however this one features less humans so naturally the enemies look less similar. Then again the enemies are aliens that look alike as well as Hobo clones so there’s not much of a difference. The music as well is the same from the first four games. It has a jazzy tune that swaps from time to time which is also good.

Hobo 5 is the same as the first four games in terms of its gameplay mechanics. The game is a 2D beat em up mixed with some action and fighting elements. The purpose of a beat em up is to fight, beat and defeat all enemies on the screen in the area. Once all enemies are defeated, the signal to proceed is given where the players can then proceed to the next part of the game. In order to beat those enemies, the players can control Hobo and let him punch, kick and do a variety of combos. The combos this time have been locked so you have to learn them all over again. Unlike the first games where Hobo has available combos, this time he has to learn them again. Different enemies exist although they are mostly aliens and Hobo clones. The aliens can carry a variety of weapons and the Hobos as we already stated can use their combos as well. The combos are the usual Hobo ones that have the elements of grossness and a bunch of body fluids. Hobo will still spit, pee, poop, burp and fart on the enemies. Despite the somewhat disturbing nature of the combos, they do damage and a follow-up status like how a spit blinds the enemy and a fart can temporarily stun them. Hobo can also pick up weapons and items that he can use to attack enemies with. When you’ve completed a part of the game you are given a password. The password is useful as it will allow you to start from that point should you die or just wish to continue on from there. The game ends as usual with Hobo sleeping on a spaceship that is headed for nowhere but he doesn’t seem to care.