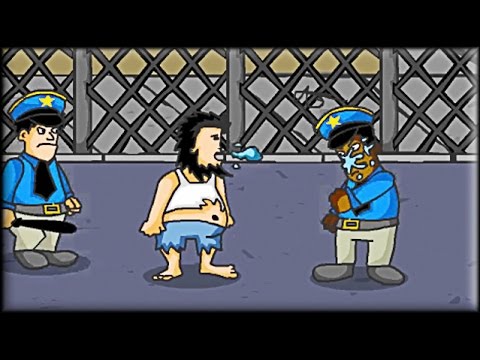 You don’t want to mess with this guy’s sleeping hours or else you will suffer a nasty battle. Help Hobo unleash an all-out brawl in the city here in Hobo! The main objective in this game is to control Hobo and defeat all the opponents you will find; normal citizens, police officers, and other staff from buildings. Use your attack and punch moves to defeat them. You will be able to unlock new attacks as you progress in a new area. Each area will also give you a certain password. These passwords will help you unlock the checkpoints in the game.

It’s tough being a hobo as you have no place to stay let alone one to call home. You’re usually alone and finding it hard to live on a daily basis. You need to have food and your daily needs as well as a toilet to use. It is tough but our Hobo doesn’t seem to mind. He’s just sleeping in the dump site until a guard wakes him up presumably telling him that he can’t sleep there. Hobo doesn’t like this which is why he storms off to fight the people at the dump site. Apparently his range ended with him beating up a lot of people in town.

Hobo’s graphics if you can call it that uses hand drawn animation representing a classic cartoon feel to it. It’s like what you would normally see in a comic book but has a more whimsical and comical feel to it. One other thing you need to be prepared is that Hobo can be a bit obscene or disgusting. He uses moves that involve using his spit, piss and poop. Then again it’s not animated in an exaggerating way but you may still be grossed out by it in a way. Plus there is the aspect of blood in the game as the game has a lot of blood. Then there is the musical aspect which has two tracks playing but gives out the impression of being on the street as it has that jazzy feel to it.

Hobo 1 is a 2D fighting game mixed with the elements of being a beat em up game. Players control Hobo as he fights the enemies on the streets. Pressing the button can make him punch and another button to make him do things. Continuously using or combining buttons can make him do a variety of combos. There are also special combos that Hobo can do. However you have to unlock these combos as the game progresses. These combos involve Hobo using his bodily fluids like spit and piss to confuse the enemy. He can also fart and use his poop as a weapon. Speaking of weapons, Hobo can also use the items on the ground like a bottle or a trash can. He can use those items to beat up on the enemies. The enemies consist of cops, guards and workers. Plus there are also the civilians that get in the way that become enemies. The game can be a bit hard if you would want to choose the right difficulty. If Hobo dies, he has to restart from the last point or you can input passwords to go to the level where you want to be. You can only get the password once you complete the level. Then again there’s nothing stopping the players from looking different sites to get those passwords in advance. Hobo ends up getting in jail after his rampage in the city. Apparently he doesn’t care much as he just falls asleep in his cell.